(March 12, 2019) The Columbus Osteopathic Association (COA) will present its highest honors at the Annual Meeting, March 13  at Le Meridien/The Joseph. Awards are given annually to recognize exemplary accomplishments in personal, scientific, community and professional affairs, especially in service to the osteopathic profession. 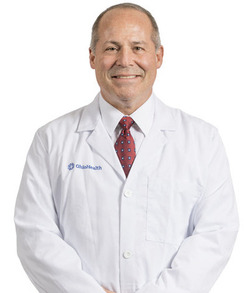 Dr. Weihl, a past president of the COA, has been a strong advocate for osteopathic medicine and has admirably served the profession throughout his 20 years in practice.

Since 2001 when he served as chief resident at Doctors Hospital in Columbus, he has been in private practice, treated inmates at a county jail, worked at hospital-owned practices, was medical director at a post-hospital skilled nursing care facility, and served as assistant director for two family medicine residency programs, and program director at Doctors Hospital family medicine residency. Currently he is VP of Medical Affairs and director of Medical Education at OhioHealth O’Bleness Hospital in Athens.

His residents, colleagues, and patients cite his varied experience as well as skill and compassion as important factors to his success as a leader, teacher, and physician. His residents are inspired by his knowledge, work ethic, and commitment to training the next generation of osteopathic physicians.

Active within the profession at the local level, he was elected COA president in 2014; served as medical staff president at Doctors Hospital; was active on several committees at Doctors, including Credentials Committee chair; and served on the OhioHealth Board of Directors. He also represented COA on the Healthcare Collaborative of Greater Columbus.

Ms. Woods worked within the osteopathic family for 40 years. She retired in December from Ohio University Heritage College of Osteopathic Medicine and the Centers for Osteopathic Research & Education (CORE) after 20 years of service. Prior to that, she had worked at Doctors Hospital in Columbus for 20 years.

At the CORE, she worked to provide quality osteopathic graduate medical education programs. Known as a "mother hen" she advocated for osteopathic residents and went above and beyond her job to serve and promote the profession.

Unable to attend the March 13 event, Woods will receive her award at a later date.

Named for Captain James F. Sosnowski, DO, the Distinguished Service Award, was instituted in 1988 in memory of the only DO killed in action in Vietnam. On February 16, 1968, a mortar shell directly hit a field hospital in Tay Ninh, Vietnam, where Dr. Sosnowski, who trained at Doctors Hospital in Columbus, was in the operating room with his patient, an American soldier. Both were killed instantly. Dr. Sosnowski, who was president of his graduating class at Des Moines University College of Osteopathic Medicine, was two weeks shy of his 28th birthday.

The Advocate Award, established in 1997, is named in memory of William I. Linder, DO, who served as editor of the COA publication called The Advocate. The newsletter allowed him to marry his writing skills to his great love of medicine. Dr. Linder was a great proponent of osteopathic medicine and osteopathic medical education. One of the songs he loved to play on his guitar (he was not only a skilled physician and talented writer, but also a musician) was one he wrote himself about Dr. Andrew Taylor Still.

The Annual Meeting also features a presentation from OOA President Jennifer J. Hauler, DO; the installation of the COA president for 2019-2020, Miriam S. Garcellano, DO; and a medical lecture.